The Battle for the Olympia VIII: 2003 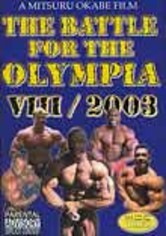 The Battle for the Olympia VIII: 2003

2003 NR 2 discs
Go backstage and see the world's greatest bodybuilders' hard-core workout routines as they get ready to square off in fierce pose-downs at the 2003 Olympia competition. Sponsored annually by the International Federation of Bodybuilders, the Mr. Olympia contest -- inaugurated by Joe Weider -- is considered the sport's foremost event. Venerable past competitors include Arnold Schwarzenegger and Lou Ferrigno.