The Battle of Aiken 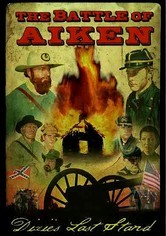 The Battle of Aiken

2005 NR 1h 23m DVD
West Point rivals Hugh Kilpatrick (Brad Owens) and Joseph Wheeler (Danny Francis) are cavalry generals who face off at the Battle of Aiken, the final Confederate victory of the Civil War. Writer-director Christopher Forbes recounts the events leading up to the historic conflict and meticulously re-creates the battles with the help of thousands of Civil War reenactors. The drama also stars Tripp Courtney and Darlene Donofrio.