The Battle of the Bulge: World War II's Deadliest Battle 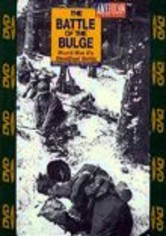 The Battle of the Bulge: World War II's Deadliest Battle

1994 NR 1h 30m DVD
A must-see for World War II history buffs, this documentary melds first-person narratives, historical footage and modern interpretation to tell the story of the Nazi army's push through a thin line of American soldiers in the winter of 1944 and 1945. Army veterans and historians recount the Germans' surprise attack through thick fog into Belgium, which created a bulge in Allied lines and left more than 70,000 casualties in its path.