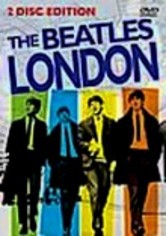 2007 NR 2 discs
A piece of Beatles history is revisited in this tour of key London locales made famous by the Fab Four. London Beatles Fan Club founder Richard Porter guides Beatlemaniacs to the EMI recording studios, the Beatles' London homes, the iconic Abbey Road crosswalk, Decca Studios, where the band was rejected after an audition, and more for a &NFifan&NFi_;tastic look at the group that changed rock 'n' roll.