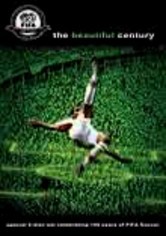 2002 NR 1h 44m DVD
Founded in Paris in 1904, the Fédération Internationale de Football Association (FIFA) turned the game of soccer into a worldwide phenomenon by uniting teams from around the world in international matches. This retrospective film celebrates the 100-year period since FIFA's creation, taking a closer look at the players, teams and contests that made an impact on the sport and brought a love for the game to the world.