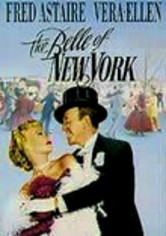 1952 NR 1h 21m DVD
Fancy feet Fred Astaire plays Charles Hill, a playboy trying to win the heart of Angela Bonfils (Vera-Ellen), a Salvation Army worker, in this musical set during the turn of the century. Notorious for leaving his brides-to-be at the altar, it's not surprising that Angela doesn't return his affection, but Charles is determined to win her over with plenty of song and dance. Alice Pearce, Marjorie Main and Keenan Wynn co-star.