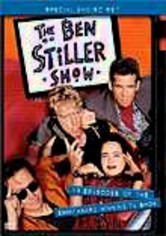 1992 NR 2 discs
Although it had a short shelf life, "The Ben Stiller Show," which debuted in 1992, mined pop culture in ways that had rarely been seen before on prime-time television, leaving a lasting mark with its spoofs and satirical sketches. The show featured skits performed by a talented troupe plus Stiller himself (who does his noteworthy Tom Cruise impression), with Janeane Garofalo, Andy Dick, Bob Odenkirk and John F. O'Donohue.