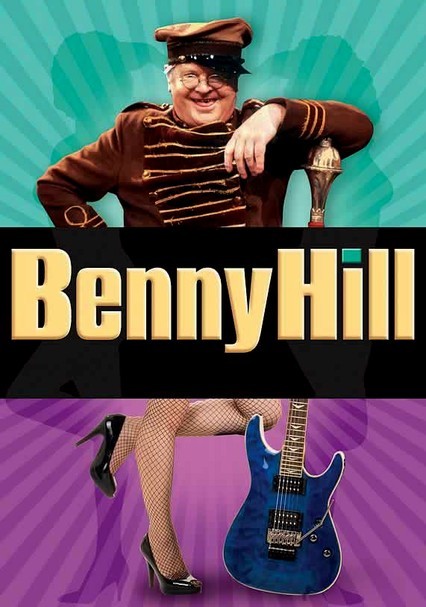 1969 TV-PG 5 seasons
Celebrated British comedian Benny Hill pioneered sketch comedy, and his hilarious television show -- broadcast in some 140 countries worldwide -- features what he is best known for: burlesque, slapstick and double entredres. Lampooning just about everything, Hill often mimed and used sight gags as well as undercranking during "live" animation portions. The supporting cast for his show includes Henry McGee, who does the announcing.

Renowned British comedian Benny Hill was a pioneer in the area of sketch comedy, offering up hilarious but often controversial parodies on his television series. No societal stone was left unturned as he lampooned everything under the sun, tongue planted firmly in cheek almost every time. This release features episodes from the years 1969-1971 in their original glory, including some rare black-and-white clips.

During the anything-goes decade of the 1970s, British comedian Benny Hill cultivated his brand of risqué humor and scatological slapstick. Featuring the English clown prince at his brassy best, this compilation of 10 "Benny Hill Show" episodes from 1975 to '77 contains "The Reluctant Bridegroom," a sketch that elevated the popular variety program to a new plateau, and the beloved "Beach of Waikiki" ballad.

Cheeky comedian Benny Hill made his name by perfecting his unique mix of vaudevillian humor and bawdy British wit. This zany collection, the fourth in a series that explores his early work, features episodes from the late 1970s. The upshot is a step back to more innocent times -- remarkable, given Hill's favorite topic -- when sex was hinted at but never fully revealed as it is in the 21st century.

Naughty Brit Benny Hill is up to his usual tricks in this collection of episodes from his brilliant sketch-comedy series featuring scantily clad buxom beauties, ribald gents and unforgettable characters. Hill's rapid-fire double entendres outraged censors but delighted fans on both sides of the Atlantic. The set contains nine raucous episodes taped from 1982 to '85 and includes several scenes never shown in the United States, plus a featurette.

The bawdy Brit returns with more of his cheeky humor in these late 1980s episodes from the hit series. Some of Benny Hill's most popular characters -- including Fred Scuttle and Lana and her Performing Men -- make appearances. Sketches include "The Crook Report," "The Halitosis Kid" and much more. This collection contains eight hour-long episodes in uncut versions never seen on television in the United States.