The Best of Deathmatch Wrestling: Vol. 4: Queens of the Deathmatch 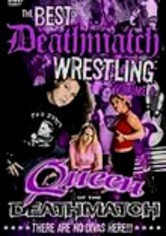 The Best of Deathmatch Wrestling: Vol. 4: Queens of the Deathmatch

2006 NR 3h 0m DVD
Seven ladies indulge in some far-from-ladylike behavior as they vie to become "Queen of the Deathmatch" in these brutal bouts featuring the toughest female wrestlers from Japan and the United States. You'll have a ringside seat to witness no-holds-barred battles in which the grapplers use every weapon in their arsenals -- including staple guns, thumbtacks, broken glass, barbed wired and electrified light tubes -- to best their opponents.