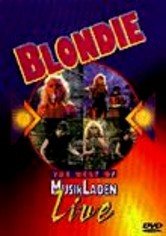 1978 NR 0h 30m DVD
The members of superstar band Blondie rock out on songs from their first two albums ("Blondie" and "Plastic Letters"), which had a more punk/new wave sound than later work. This 1978 live performance from the popular German TV show "MusikLaden" reveals Blondie bursting with raw energy and spunk on songs such as "X-Offender," "Little Girl Lies," "Look Good in Blue, "In the Flesh," "I Don't Have the Nerve," "Man Overboard" and "Love at the Pier."