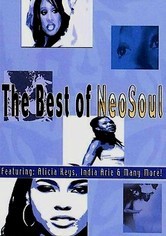 2006 NR 1h 25m DVD
Starring contemporary music personalities such as Alicia Keys, India.Arie, Jill Scott and Ashanti, this retrospective program captures the spirit of neo soul while revealing its roots. A branch of rhythm and blues that melds contemporary R&B with 1970s soul and modern hip-hop, neo soul began in the mid-1990s with the rise of acts such as Tony! Toni! Toné! D'Angelo and Groove Theory, whose innovative sounds paved the way for new artists.