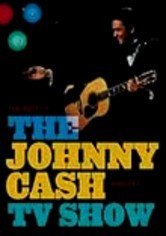 1969 NR 2 discs
Airing from 1969 to 1971, "The Johnny Cash Show" showcased the musical talents of the country's best artists; this collection rounds up some its most memorable performances, featuring the likes of Ray Charles, Roy Orbison and Bob Dylan, among others. Country legend and host Cash also performs some of his greatest hits, including "Ring of Fire," "I Walk the Line," "A Boy Named Sue," "Man in Black" and many more.