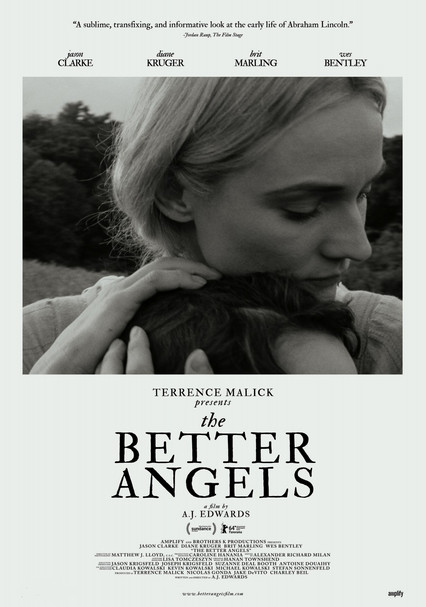 2014 PG 1h 35m DVD
Revisiting the many hardships of Abraham Lincoln's youth, this biographical epic also highlights the influences that helped shape his personality -- including the role played by Lincoln's stepmother, Sarah, in developing his beliefs.

Parents need to know that The Better Angels is a Terrence Malick-ish drama about a young Abraham Lincoln. Although it's historically accurate about details of young Lincoln's life, the movie is more of a poetic look at how Lincoln's boyhood was forever changed by the death of his beloved mother and the arrival of his stepmother. In addition to a bit of era-accurate smoking, there's some corporal punishment, as Mr. Lincoln punishes his children by spanking them with a switch. And Lincoln witnesses a chain gang, but the movie itself isn't that violent. It is, however, likely a bit too contemplative and lyrical to appeal to younger viewers.

Lincoln's father and his new wife lie in bed together, but it's not sexual.

Thomas Lincoln punishes Abraham in a way that was customary for the time: by spanking/hitting him with a switch. Abraham's mother, as well as two relatives, die from milk poisoning. Mrs. Lincoln's demise may be upsetting to see: she vomits, writhes, and convulses before dying. The narrator says that Sarah Lincoln (Abraham's sister) also went on to die young -- during childbirth.

Subtle, spiritual messages about how Lincoln's early life was shaped by his loving mother (who died young) and his stern, hardworking father. Suggests that Lincoln's early experiences seeing a chain gang, playing in the fields with his mother, and dealing with his father's fatherly justice influenced him into becoming an honorable, just man.