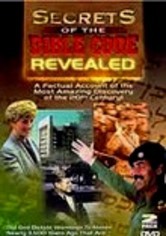 2006 NR 2h 0m DVD
This fascinating documentary explores the possibility that the Old Testament holds a secret code containing hidden messages and references to important figures and events of the future such as Napoleon, Adolf Hitler, Albert Einstein, World War II and the tragic events of Sept. 11, 2001. Experts on both sides of this provocative issue, including Bible scholars and members of the academic community, debate the theory's authenticity and influence.