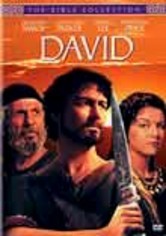 1997 NR 3h 2m DVD
Nathaniel Parker stars as David, the shepherd boy who grew to be king of Israel, as his saga comes to life in this epic production originally broadcast on TNT -- part of a series of tales from the Old and New Testament. From his legendary battle with the Philistine giant Goliath to his struggles with King Saul (Jonathan Pryce) -- and his love for a forbidden woman (Sheryl Lee) -- David's life is full of unforgettable dramas. Leonard Nimoy co-stars.