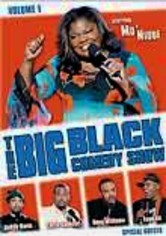 2004 NR 1h 28m DVD
Get ready to laugh with the first installment of "The Big Black Comedy Show" series, filmed during live comedy shows at various large venues throughout the country. Hosted by Mo'Nique and Rodney Perry, this compilation highlights many of the best and brightest contemporary African American comedians. Routines by comedians such as Chris Spencer, De Ray Davis, Doug Williams and Esau Ali are featured.