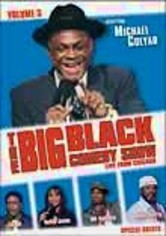 2005 NR 1h 32m DVD
For the popular Big Black Comedy Show, the third time out is just as entertaining as the first and second installments, with host Michael Colyar introducing another talented lineup of African-American comedians. Filmed live in Chicago, this concert-style program captures the raucous crowd reaction that makes you feel like a member of the audience, thanks to punch lines from Lil Rel, Retha Jones, Wil Sylvince and Ricky Harris.