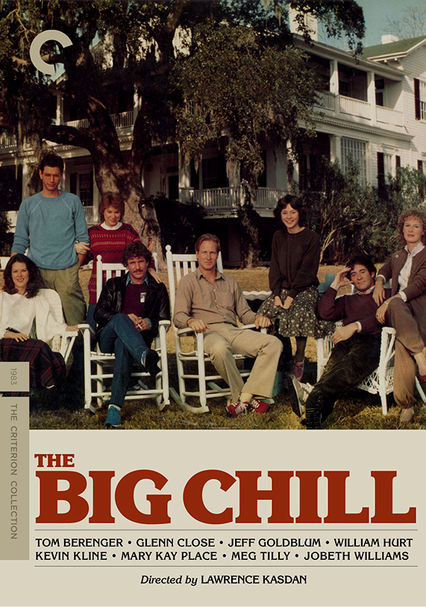 1983 R 1h 46m Blu-ray / DVD
After years apart, a group of idealistic former college buddies (William Hurt, Kevin Kline, Glenn Close, JoBeth Williams, Mary Kay Place, Tom Berenger and Jeff Goldblum) who've followed divergent paths as adults reunite at the funeral of one of their own, reconnecting and reminiscing while a soundtrack of 1960s hits plays in the background. The ensemble performance in this Oscar-nominated dramatic comedy reflected the period's baby boomer angst.

Parents need to know that The Big Chill includes a lot of frank discussion of sex. There are two sex scenes that clearly imply what's going on but aren't graphic, and one character is seen naked in the shower with one breast shown. There's quite a bit of profanity, including "s--t" and "f--k." Suicide is discussed, and the sewn-up injuries on the victim's corpse are briefly glimpsed. Snorting cocaine, smoking marijuana, and taking Quaaludes are shown along with drinking wine and beer, mostly with dinner and afterward. The story of college friends who reunite after 15 years is unlikely to hold much interest for teens as the characters relive old times and talk about how it influenced where they find themselves now.

The intertwining sexual history of the group, and how it affected their lives afterward, is a prominent theme, and frank discussions include mention of herpes, masturbation, and impotence. There are a couple instances of passionate kissing and two brief sex scenes: One is clothed, in shadow, and off-screen gratification with hands is implied. The other is well lit and in bed but under covers and only shows a man's bare back and a woman's bare shoulders. A woman is shown naked in the shower and one breast is visible. Condoms and a birth control pill holder are shown. A past abortion is implied. One character wants to have a baby, talks about which friend to have sex with to get pregnant, and is honest about what she wants with the men she does approach.

Suicide is discussed, and the sewn-up injuries on the victim's corpse are briefly glimpsed.

Strong language includes, most frequently, "s--t" and variations; "f--k" and variations about a half dozen times; and once or twice each "crap," "a--hole," "bitch," and "jerk off."

Maintaining a friendship over time takes effort, but it's well worth it.

The adults drink wine and beer at dinner and afterward, and Sam is shown asking for another mini bottle on an airplane. One character is a smoker and is shown smoking several times, and other characters join her once or twice. Past drug use is mentioned frequently. Snorting cocaine is shown. Smoking marijuana is shown two or three times, and a character is shown rolling joints. While driving, a character pours miscellaneous pills onto the passenger seat and takes some. Another character takes a Quaalude with wine.