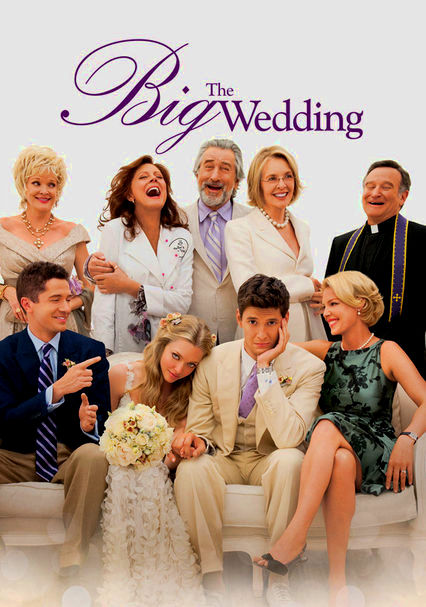 2013 R 1h 30m Blu-ray / DVD
A long-divorced couple feigns years of wedded bliss to please a special guest at their son's nuptials: his birth mother. As the hoax spins out of control among family and friends, it leaves behind a poignant and funny tale about the ties that bind.

Parents need to know that The Big Wedding is racier than most family wedding comedies and could make for an uncomfortable parent-teen movie night. There's lots of sexual content -- the opening scene shows Robert De Niro about to perform oral sex on Susan Sarandon -- as well as discussion of virginity, sexual orientation, and open marriage. There's also adultery, public displays of (more than) affection and brief nudity (a woman's naked behind is visible as she skinny dips). In addition to the sex jokes and sex scenes, you can expect frequent strong language ("f--k," "s--t," "a--hole," "bitch," etc.) and drinking (the father and the priest are both alcoholics).

The very first scene includes a discussion of oral sex and a man about to perform it on his dressed (except for her underwear) partner. A 29-year-old doctor is a virgin who wants to save himself for someone special but then is easily seduced by a Colombian woman who strips to skinny dip with him (she's shown from the back). She also fondles him at the dinner table. Premarital sex is discussed in front of a priest. The entire family discusses their mother's discovery of tantric sex and her "9-hour orgasm." Two loud sex scenes include exes who do it for old times' sake and a virgin who promptly wants to do it again after his first time. Parents discuss adultery, and another set of parents talks about bisexuality and having an open marriage. Discussion of medical sexual aids (i.e. pills).

Physical comedy includes people falling fully dressed into a pool and Don getting slapped or punched by each of the women in his life.

In the end, family members and best friends repair their relationships and commit to having a blended family of relatives who trust and love each other, despite their many flaws and personal problems. They lie and deceive to get there, but their intentions are mostly good.

Don and Father Moinighan discuss going through AA together and how hard it is to stay on the wagon. On the wedding day, Don gets drunk and starts spouting off inappropriate comments. Adults are shown having drinks throughout the wedding weekend at dinners and receptions. Lyla tries to smoke in a hospital but is stopped.