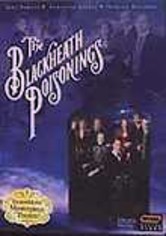 1992 NR 3h 0m DVD
The Collard family is as dysfunctional and hateful as they come, its members seething with deceit, adultery and ambition. Some family members want a specific relative dead ... but when they get their wish, who's to blame for the murder? The mystery of The Blackheath Poisonings is off to a rousing start in Masterpiece Theatre's classic drama set in turn-of-the-century Britain. The film is based on a best-selling novel by Julian Symons.