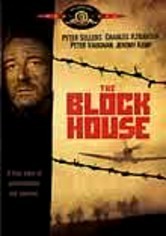 1974 NR 1h 32m DVD
The Allied bombardment of Normandy sends seven forced laborers into a concrete bunker filled with food, wine and other necessities. They're overjoyed until they realize they're trapped. As time passes, fear gives way to boredom and then despondency when they realize no one knows they're missing. Based on a gripping true story, this movie stars Charles Aznavour and Peter Sellers in a rare dramatic role. Clive Rees directs.