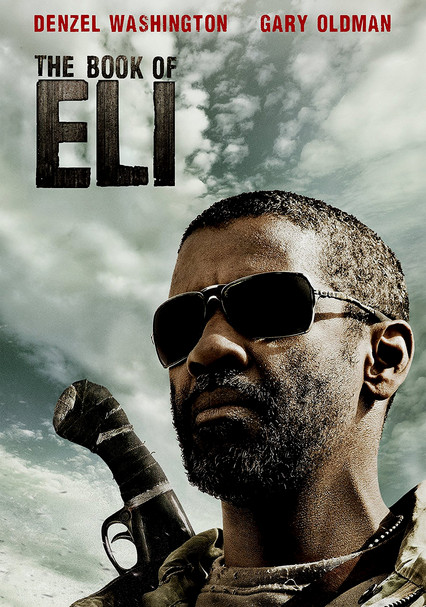 2010 R 1h 58m Blu-ray / DVD
Determined to protect a sacred text that promises to save humanity, Eli goes on a quest westward across the barren, postapocalyptic country. But when he stops in a decrepit desert town, the town's tyrannical leader plots to take the book by force.

Parents need to know that The Book of Eli is very violent -- there's lots of weapon use, body parts getting chopped off, fighting, and dead bodies, as well as suggested rape (sounds of ripping clothes and women's screams) -- and takes place in a bleak future. But it has a "comic book" tone that keeps it from being a total downer, and it actually feels more like a Western than a sci-fi epic, with a loner hero (Denzel Washington) who wanders into a lawless town and tangles with the kingpin (Gary Oldman). The movie's subtext tackles religion: The bad guy wants to use the world's last remaining Bible to control and dominate the "weak and desperate," while the hero wants to deliver the book to a safe place. Expect some sexuality (though no nudity), strong language (including "f--k"), and -- worth mentioning again -- lots of action violence.

The future world presented in the movie has the equivalent of prostitutes, though they're only mentioned and rarely seen. A woman tries to seduce Eli by the side of the road by exposing her cleavage (no nudity). Later, Solara is sent to Eli's room while wearing a skimpy, cleavage-revealing dress and ordered to provide him sexual favors (though her orders are more suggested than actually spoken aloud). But Eli refuses to take advantage of her.

Extreme violence, generally of a comic book nature. Eli wields a bow and arrow and shoots both animals and people (sometimes in some very uncomfortable body parts). He also carries an enormous knife, with which he chops off hands, arms and heads. Lots of hand-to-hand combat as Eli fights off crowds of attackers; plenty of gunfights (and hand grenades) as well. The movie shows the impact of the bullets and the arrows -- including those shot at a bird and a cat -- as well as plenty of blood. Viewers see dead (and sometimes decomposing) bodies, and there's a suggestion of cannibalism. Rape and attempted rape are also suggested (sounds of ripping clothes, women's screams) both on-screen and off, in chaotic crowd scenes and, notably, in the case of one important character.

One possible interpretation of the movie is that it has a bone to pick with organized religion, instead celebrating individual spirituality. The villain wants to obtain the last existing Bible and use it for power and control over the "weak and desperate," while the hero's goal is to protect the book and deliver it to a safe place. He reads it regularly, but given his violent nature and loner status, it's not very clear that he's learned anything from it.

Some brands survive the apocalypse intact -- Eli cleans himself with (and later trades) little individually wrapped handi-wipes from KFC, and Carnegie uses a bullhorn with "Motorola" clearly marked on the side. Partial sign for Puma shoes.

Some background characters drink in a bar, become surly, and assault Eli.