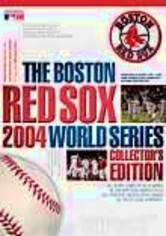 2004 NR 11 discs
Catch the most stunning comeback in baseball history with this uncut collection featuring 11 games from Boston's unforgettable 2004 postseason run to the title. Included are seven games from the League Championship Series in which the Bosox put the suicide squeeze on the Bronx Bombers, plus the four-game World Series sweep of the strong St. Louis Cardinals. Relive the glory as an 86-year drought ends for Boston's long-suffering fans.