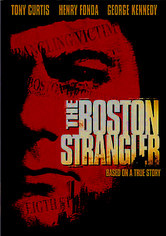 1968 R 1h 56m DVD
During the mid-1960s, Boston was gripped with fear as women throughout the city were being raped and murdered by a serial killer. Based on a true story, this film recounts the events that led up to the capture of Albert DeSalvo (Tony Curtis), aka The Boston Strangler, a mentally unstable man later convicted of the killings. The story is told from the perspective of the police detectives desperately trying to find DeSalvo before he strikes again.