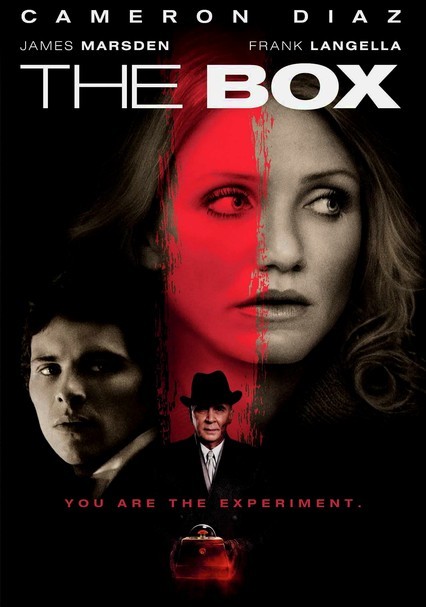 2009 PG-13 1h 55m Blu-ray / DVD
In this eerie thriller, a disfigured man informs a couple that they have 24 hours to decide whether to push a button inside a box that will net them a million dollars but that will also cause the death of a complete stranger.

Parents need to know that this Cameron Diaz thriller from the director of Donnie Darko is based on a macabre premise: that human beings would rather win money than protect a stranger's life. It's too confusing and intense for tweens and young teens, and, in addition to the cloud of violence hovering over the entire movie, there are several disturbing images, including an upsetting disfigurement; two women being killed at close range; people who have eerie, unexpected nosebleeds; a fatal car accident; and gun violence. The swearing is fairly mild (one use of "s--t" is as strong as it gets), the sexuality is limited to the main couple kissing passionately and embracing, and the drinking is mostly social and done by adults. Still, most kids won't want to bother figuring out the movie's dark themes and puzzling plot.

The entire movie is based on a violent premise: Couples must decide whether to sentence someone they don't know to death and win $1 million or to pass up the lucrative offer. There's also gun violence, scenes that feature two dead women, a kidnapped child, and other bizarre, disturbing goings on. One of the main characters is horribly disfigured in the face, and another protagonist is missing almost all of the toes on her foot. Characters often have strange nose bleeds and act creepily in general.

Despite the movie's overwhelmingly negative message about humans being more selfish than selfless, Norma and Arthur's actions ultimately prove that as parents, at least, they have enough unconditional love for their child to be completely self-sacrificing.

Corvette, Jack Daniels, and JVC are all seen.

Adults drink wine, cocktails, and champagne at a rehearsal dinner and reception. Arthur says he "needs a drink" and has a glass of whisky.