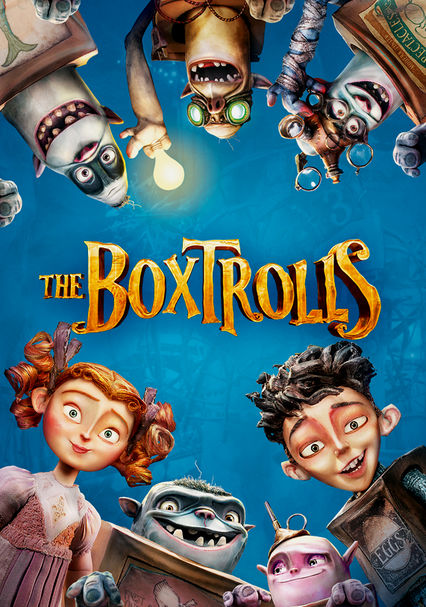 2014 PG 1h 36m Blu-ray / DVD
In this animated fable, young orphan Eggs lives in an underground cave with his adoptive family: a band of impish creatures called Boxtrolls. When a malicious exterminator sets out to destroy them, they look to Eggs and a plucky rich girl for help.

Parents need to know that while The Boxtrolls isn't quite as supernaturally creepy as the filmmakers' previous movies, Coraline and ParaNorman, it still has a lot of peril, tense moments, and a very unpleasant villain. Sympathetic characters are presumed dead at different points, a crying baby is carried away in the middle of the night, and the bad guy is bent on total extermination of the boxtrolls, painting them as bloodthirsty monsters, even though they're really peace-loving tinkerers. His extermination machine is loud, scary, fiery, and destructive, and he looks positively unhinged when he gets riled up. The movie may be animated (stop-motion), but it's really too intense for younger kids (especially when seen in 3-D). Characters are constantly in danger, whether from their own or others' actions, and there are some upsetting separations. One character has a significant food allergy that plays a key role in the plot; his reaction is very exaggerated, but it could strike a chord for kids and families who deal with allergies. There's not much in the way of language (one "oh my God"), but a character does wear a low-cut gown and fishnet stockings. All of that said, the movie offers a brave main character in the form of loyal, inventive Eggs, as well as positive messages about tolerance, family, standing up for yourself, and fighting for what's right.

Popular performer Madame Frou Frou wears a lot of make-up, fishnet stockings, and a low-cut gown (though she isn't all she appears to be); her performance includes some flirty gestures and suggestive shimmying. Some lines about cheese are delivered in a way that sounds lascivious ("I like a raw brie"). Eggs scratches his privates in public (nothing graphic shown). He also kisses ladies' hands and licks one. The boxtrolls' naked behinds are shown in a couple of scenes near the end of the movie.

(Spoiler alert!) Snatcher is very creepy and intimidating; his glee in capturing the boxtrolls -- and threatening anyone who gets in his way -- makes him seem unhinged. The scary extermination machine he invents is big, loud, fiery, smoky, and relentless; it causes chaos and destruction wherever it goes. The boxtrolls are at first presented in a way that might scare little viewers -- yellow eyes, hissing noises -- but they soon become much friendlier. Boxtrolls, including the ones Eggs is closest to, are captured and presumed dead on a few different occasions; most disturbing is a scene in which it appears that they've all been smashed flat. In their own home, some of the boxtrolls are electrocuted as they work on their gadgets, with no apparent harm. The film opens on a dark and stormy night, with a crying baby being carried away by boxtrolls (a scene that could upset younger kids until they realize the baby is OK). At the end of the movie, a key character explodes after ignoring a dangerous allergy that causes disturbing swelling, visions, and angry outbursts (an earlier episode is treated with leeches). Madame Frou Frou sings a strident song about killing the boxtrolls that gets the crowd worked up. Winnie is rather bloodthirsty, fixated on imagining -- and describing -- all the things the boxtrolls might do to her if they caught her. Lots of chases, falls, bonks, and bangs as characters flee, etc. Eggs and the boxtrolls eat live bugs with relish.

One "oh my God." Sparing use of rude words like "brat" and a few stand-in words/expressions such as "mother of sausages!"

The movie's central message revolves around the danger of making assumptions about what someone is like based on how they appear -- i.e. just because the boxtrolls look like "monsters" doesn't mean that they're evil or dangerous; the real monsters are those who set out to exterminate them because they're different. You are what you make of yourself. Characters also learn the importance of standing up for yourself and fighting back against injustice, changing/taking risks when to do otherwise puts yourself and others in peril, and embracing family wherever you find it. The fact that the central villain is motivated by envy and becomes even more resentful when he's snubbed by his "betters" illustrates why it's not a good idea to consider anyone "beneath" you. Snatcher's assistants raise a thorny (but thought-provoking!) moral issue when they debate the rightness of their actions helping Snatcher capture the boxtrolls -- are they good guys because they're following their boss' orders or villains because they're hurting potentially innocent creatures?

Well-to-do characters are obsessed with cheese, which seems to be the most valuable substance in town. Also lots of off-screen marketing/promotional tie-ins with a wide range of products, from eggs and raisins to fast food and toys.

Characters seem to become almost intoxicated by the various exotic cheeses they consume.