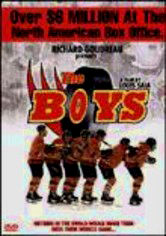 1997 NR 1h 47m DVD
Stan (Rémy Girard) runs the blue-collar tavern Chez Stan; he also coaches a hopeless amateur hockey team of his beer-drinking buddies called Les Boys. When Stan finds himself up to his kneecaps in debt to mobster Méo (Pierre Lebeau), he makes a deal. If Les Boys can win a match against Méo's team of thugs, the debt will be forgiven. Now, Stan must lead his troubled team in the game of their lives in this underdog comedy.