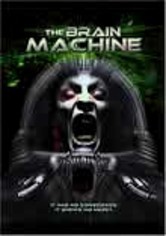 1977 PG-13 1h 21m DVD
When a female scientist (Elizabeth Allan) is taken hostage by a deranged murderer with ties to an illegal drug ring, she's hooked up to a contraption that's able to probe her innermost thoughts. But far worse than that are the unfortunate side effects -- which include bouts of severe psychosis. Maxwell Reed, Patrick Barr, Russell Napier, Gibb McLaughlin and Neil Hallett co-star in this far-out sci-fi thriller written and directed by Ken Hughes.