The Brotherhood IV: The Complex 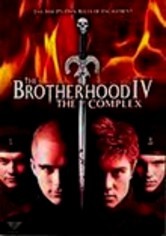 The Brotherhood IV: The Complex

2005 NR 1h 36m DVD
Lee Hanlon (Sebastian Gacki), the smartest student at an elite military school called the Complex, is intrigued by the academy's Black Skulls brotherhood but finds himself thrust into the role of global savior when he discovers their devilish origin. April Telek and Graham Kosakoski also star in horror-meister David DeCoteau's creepy shocker about an age-old secret society's demonic plan to rule the world.