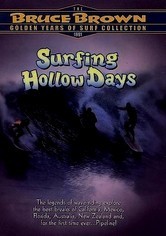 1961 UR 1h 24m DVD
Filmed before his wildly popular Endless Summer, this Bruce Brown documentary follows famed surfers Robert August, Peter Johnson, Mike Haley, Kemp Aaberg and others as they ride waves in Australia, Mexico, California and Florida. It also goes behind the scenes, offering glimpses of the surfers' personal lives and the culture they inhabit. Watch for the 15-foot shark checking out the line-up at Rincon (in Santa Barbara, Calif.)!