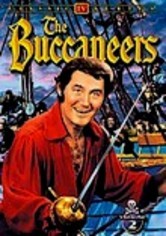 1956 NR 1h 38m DVD
Dan Tempest (Robert Shaw) is a pirate forced to pick between prison and a stint as a privateer in service of the British regime in this 1950s TV series. In "Before the Mast," the buccaneers battle Spanish pirate El Supremo; in "Conquistador," Tempest and his men are apprehended on their own ship; in "Captain Dan Tempest," Tempest find himself arrested; and in "Conquest of New Providence," the crew must escape the gallows.