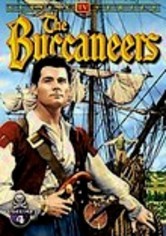 1956 NR 1h 15m DVD
In this swashbuckling quartet of episodes of the vintage series, pirate-turned-hero Dan Tempest (Robert Shaw) and his trusty crew fight for the Crown in the British Caribbean colony of New Providence. The high-seas adventures include "Blood Will Tell," "The Decoy," "Dan Tempest's War with Spain" and the clever "Dan Tempest and the Amazons," in which Dan and his crew are taken prisoner by seven English women.