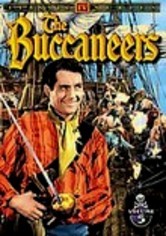 1956 NR 1h 15m DVD
Beware, all ye evildoers on Caribbean waters! Ex-pirate Dan Tempest (Robert Shaw) and his crew have sworn to defend King George's colonies from all interlopers in this classy British adventure series from the 1950s. In these four episodes, the crew is stranded on a deserted island in "Marooned," Blackbeard intercepts a woman-filled ship in "The Ladies," the crew gets spooked in "Ghost Ship," and Capt. Tempest enters the tobacco trade in "To the Rescue."