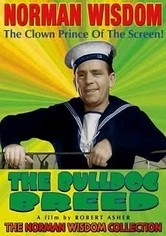 1960 NR 1h 34m DVD
After a few failed suicide attempts, lovelorn assistant grocer Norman Puckle (Norman Wisdom) joins the British Navy, where -- despite his bumbling behavior -- he is chosen to be the test subject for the first manned rocket to outer space. Popular British comedian Wisdom shines in this 1960 star vehicle, which also stars Ian Hunter as Admiral Blyth. Watch for a brief scene with Michael Caine and Oliver Reed in their only on-screen pairing.