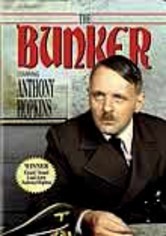 1981 UR 2h 15m DVD
Anthony Hopkins won an Emmy for his searing portrayal of the hateful and tragically flawed Adolf Hitler in this made-for-TV dramatization that imagines the murderous leader's last days hiding out in a bunker. As his empire crumbles, the Nazi dictator relives the events that led him there, revealing his thoughts about his life and place in history and exposing him for the painfully awkward and misguided man that he turned out to be.