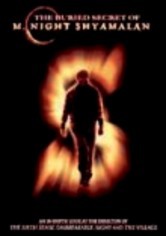 2004 TV-PG 2h 5m DVD
When it was first promoted on the Sci-Fi Channel, The Buried Secrets of M. Night Shyamalan appeared to be a tell-all that would demystify this ultra-secretive film director. Featuring sit-downs with artists who have appeared in Shyamalan's films or know him personally, such as Johnny Depp and Adrien Brody, it actually proved to be a promotional -- but still wildly entertaining -- piece for Shyamalan's 2004 movie The Village.