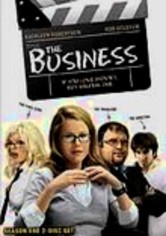 2006 NR 2 discs
For years, Vic Morgenstein (Rob deLeeuw) has made a fortune selling bottom-of-the-barrel smut and horror videos. When he acquires a classy independent movie at a film festival, he dreams of success but discovers that his reputation precedes him at every turn. Kathleen Robertson, James A. Woods, Trevor Hayes and Nicolas Wright co-star in the first season of this satirical comedy about the pitfalls of the wrong kind of success.