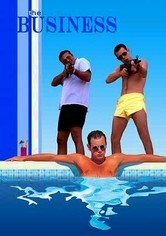 2005 R 1h 37m DVD
After offing his abusive father, young Frankie (Danny Dyer) flees South London's ghetto for Costa del Sol -- Spain's criminal haven -- where he finds himself under the wing of a brash British playboy and drug trafficker (Tamer Hassan) … and in way over his head. It's a one-way trip into organized crime for Frankie as he's seduced by the mob's flashy lifestyle. But rivalries and duplicity soon lead to his downfall in this absorbing gangster yarn.