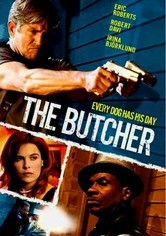 2007 NR 1h 53m DVD
Merle Henche (Eric Roberts) -- a boxer turned mob enforcer with more than 20 years of dedicated service under his belt -- learns what loyalty is worth when his employers set him up to take the fall for the multimillion-dollar heist of a rival gang. Unfortunately for them, Henche discovers the trap and ends up with a piece of the take. Now, he has just two goals: to get the rest of the money and to exact revenge on his former bosses.