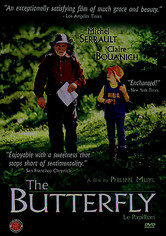 2003 NR 1h 20m DVD
All Julien (Michel Serrault) wants to do in his old age is collect and preserve butterflies. But when a woman (Nade Dieu) and her 8-year-old daughter Elsa (Claire Bouanich) take residence in his building, his world opens up for good. Young Elsa befriends Julien and sneakily joins him on a trip to the Alps to find a rare butterfly specimen. During this getaway, their touching intergenerational bond deepens in this family-friendly French film.

Parents need to know that The Butterfly, which is an excellent French film about a girl who sneaks away from her absentee mother to go on a butterfly hunting adventure with a cranky grandfatherly lepidopterist, frankly discusses topics like abortion and teenage motherhood. Elsa, the precocious 9 year old who becomes friends with Julien, is a worldwise Parisian girl who is familiar with adult topics like these. There is some profanity throughout ("s--t," "damn"), but all-in-all, these two characters light up the screen, and the acting is so far above and beyond most children's movies, the end result is a touching film about the difficulties and joys of family and friendship, all set amidst the backdrop of both Paris and the butterfly-filled countryside.

A little girl is shown trapped at the bottom of a cave-like crevasse. A poacher hunts, shoots, and kills a deer. Characters make references to serial killers.

Beautiful friendships can develop, no matter the differences in age or backgrounds between people.

At a dinner, adults are shown sipping wine.