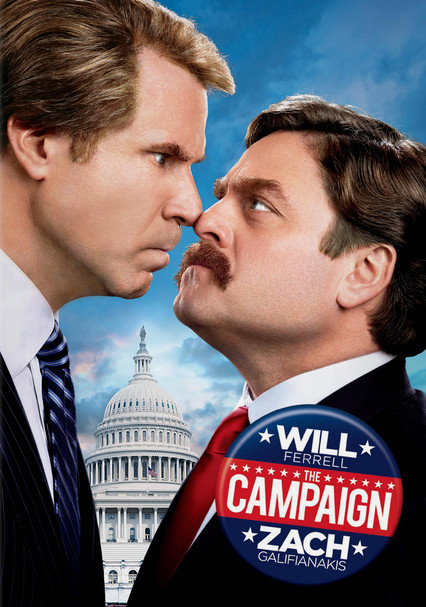 2012 R 1h 25m Blu-ray / DVD
Plenty of mud gets slung when an inexperienced contender backed by two plotting benefactors goes up against a longtime North Carolina congressman in a ruthless battle to win a House of Representatives seat.

Parents need to know that The Campaign, which stars Will Ferrell and Zach Galifianakis, is a raunch-fest from beginning to end, starting with a scene that shows a family with young kids listening to a very lewd, graphic answering machine message. There's some nudity -- a woman's nipple is visible in a social setting -- and plenty of jokes about sex and a married man's indiscretions. Expect lots of swearing, too, including various versions of "f--k," plus "s--t," "d--k," and more. Still, the subject matter -- a congressional election and the dirty campaigning that leads up to it -- is a gold mine for comedy, and it may leave you thinking about our electoral process in general, too.

Racy, with tons of sex jokes. One character leaves a very lewd message on an answering machine that's heard by children. A few sex scenes with exaggerated movements and sounds. A woman is seen in public with her nipple visible. One candidate thinks it's a good idea to release a sex tape as part of his campaign. A woman sleeps with a man who's not her husband. A tween talks about feeling up a man's wife.

Lots of cartoonish "fighting" between the two leads, with them swatting and yelling at each other. A man shoots another in the leg. Another man throws things around in a temper tantrum.

The message is a bit muddled (and obscured by some of the over-the-top content), but essentially, it's that unless you know yourself and have the fortitude to withstand temptations and pressure from others, you'll be led astray from the path you once envisioned for yourself.

Lots of over-the-top stunts played for laughs, including one scene in which one man gets another drunk on hard liquor on purpose, then calls the cops on him when he lets him drive drunk. A few other boozing scenes in social situations. A woman smokes a cigarette in secret.