The Career of Nikos Dyzma 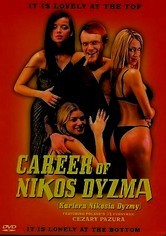 The Career of Nikos Dyzma

2002 NR 1h 50m DVD
Nikos is a master of funeral ceremonies (that's &NFiundertaker&NFi_; to you and me) who doesn't expect much from life. After drunkenly insulting a diplomat at a party, weird things begin to happen for Nikos. The news that a mysterious stranger offended the hated Deputy Prime Minister galvanizes the political elite assembled at the banquet, and a rumor that Nikos can take care of anything spreads like wildfire, making him an idol of the masses.