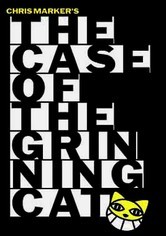 2004 NR 0h 58m DVD
In 2001, images of a cartoon cat began appearing all over Paris. In this unique film, Chris Marker documents his search for the graphic's meaning and origin, a quest that reveals the state of French politics, culture and society in the new century. Marker's cameras capture celebrity antics, political rallies, memorials and protests against French foreign policy. The finished product weaves the images together in his trademark montage style.