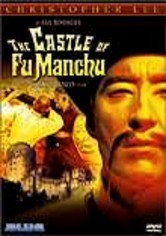 1969 NR 1h 34m DVD
Christopher Lee reprises his role as Fu Manchu, who's uncovered a way to convert oceans into ice as part of his plan to rule the world. He kidnaps Prof. Heracles (Gustavo Re) to help him but doesn't know the man is gravely ill. To save him, Fu abducts a doctor and his nurse (Günther Stoll and Maria Perschy, respectively) to operate on Heracles. In the meantime, Fu's nemeses (Richard Greene and Howard Marion-Crawford) are on the way to stop him.