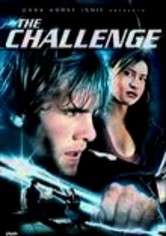 2005 NR 1h 44m DVD
Due to natural disasters and global economic collapse, civilization has broken down and the survivors forced to serve brutal warlords who rule by violence. But street fighter Jonas (Mathis Landwehr), who's trained under the last master of an ancient martial arts dynasty, may have the power to take down the ruling thugs. Directed by Johannes Jaeger, this high-octane adventure from Germany co-stars Christian Monz, Volkram Zschiesche and Zora Holt.