The Chances of the World Changing 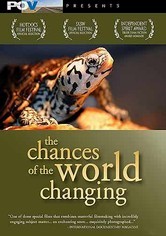 The Chances of the World Changing

2006 NR 1h 39m DVD
Former writer Richard Ogust is fully committed to saving turtles and tortoises nearing extinction, even if it means raising over 1,600 of them in his New York apartment. The Filmmakers spent two years capturing Ogust's odd, impassioned life as he celebrates birth and weeps for lost creatures, including himself. Punctuated by stirring music from Eric Liebman, the 2007 Independent Spirit-nominated film depicts a noble contribution to conservation.