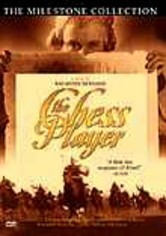 1927 NR 2h 13m DVD
With a price on his head after a 1776 uprising in Russian-occupied Poland, rebel Boleslas Vorowski (Pierre Blanchar) seeks refuge with a genius inventor who hides him in his greatest creation: a chess-playing robot that soon attracts Catherine the Great's attention. Director Raymond Bernard's sprawling drama (based on the novel by Henry Dupuis-Mazuel) is one of the French silent cinema's most visually arresting films.