The Chivalry, the Gunman & the Killer 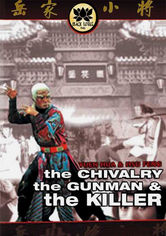 The Chivalry, the Gunman & the Killer

1977 NR 1h 30m DVD
Hua Yueh, Feng Hsu, Ying Pai and kung fu superstar Lieh Lo co-star in this soaring martial arts epic about, well, you guessed it: chivalry, a gunman and a killer. Doing battle in an ancient land, two highly skilled swordfighters go up against enemies both real and imagined, typically with stunning results. The film is notable for its thrilling fight scenes and breathtaking sets and costumes.