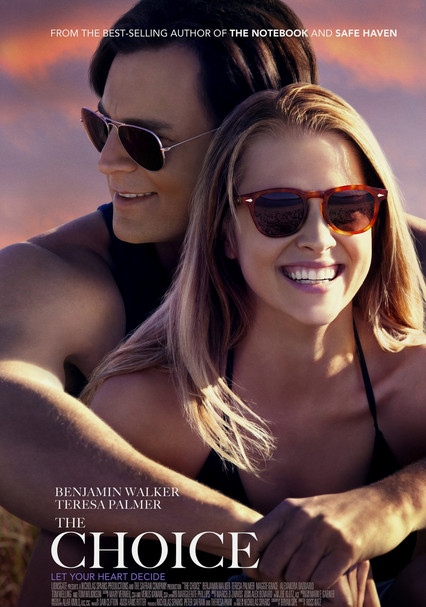 2016 PG-13 1h 51m Blu-ray / DVD
Bachelor Travis Parker is enjoying the single life in his seaside North Carolina town when the beguiling Gabby Holland moves in next door. Almost immediately, the two fall in love despite a host of obstacles -- including Gabby's boyfriend.

DramaRomantic DramasDramas Based on the Book

Parents need to know that The Choice is based on the same-named Nicholas Sparks novel and, like most of the movies based on his books, is a three-hanky romantic drama. The "choice" of the title refers (potential spoiler alert!) in part to a loving husband's dilemma regarding the extraordinary measures keeping his comatose young wife alive after a car crash (it's shown in slow motion). The agony of his grief may be difficult for younger viewers. Sexual attraction is another theme, with characters kissing passionately and the implication of sex (shirts are partially/completely removed, but there's no graphic nudity). A character's past as a womanizer is discussed; women wear bikinis, and and men ogle women. Language includes "s--t" and "ass"; adults drink beer. A man gets punched, and there's discussion of the fact that a character's mother died of cancer when he was young. A believer and a non-believer discuss the existence of God good-naturedly.

Passionate kissing. A man sweeps a table clear and lays his partner down on it; the intention is clearly to have sex, but only kissing is shown -- also, her blouse is unbuttoned to reveal her belly, and he takes his shirt off. A pregnant dog is discussed. A male dog's owner jokingly discusses his dog's using "protection." Men ogle women. Some skimpy outfits.

A slow-motion car crash is seen, but no blood is shown. A man gets punched. A character's mother died of cancer when he was young. A vet replaces a child's dead pet lizard with a live one rather than explain the death. Grief and tragedy are key themes of the movie.

Go after what you want, or you may lose it. Opposites can attract. On the other hand, supports the romantic cliche that distaste sometimes foretells love.