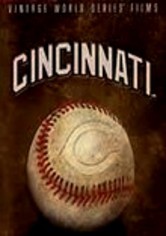 2007 NR 2h 14m DVD
The unstoppable Cincinnati Reds powerhouse called the Big Red Machine led the team to back-to-back World Series wins. The Reds followed up with another victory in 1990. Relive all three championships, from the seventh-game win in 1975 to the 1990 sweep that's been called one of the best in the game's history. Victory has never been sweeter for the Reds, with a team including players such as Pete Rose, Tony Pérez, Johnny Bench and Ken Griffey Sr.